From 2003 The Executive Office have invested over £38m in Ebrington. Ebrington Holdings Limited plans to continue on this investment.  Our aim is to bring buildings and lands back into use which will attract businesses and visitors to this stunning location.

Many new jobs have been created at Ebrington to date, with the new purpose built Grade A accommodation and a new 4* hotel it is hoped this figure will grow considerably.  Key infrastructure works continue and the impressive new Limavady road site entrance opened in October 2019 helping to ‘open up’ the site for businesses and visitors.

Ebrington has been transformed in recent years to become a vibrant place to work and visit. The scheduled Monument Star Fort Wall, the Listed and Retained buildings, mixed with new build adds considerably to the attraction of Ebrington.  Together with the new public realm and vibrant new event space ‘Ebrington Square.’ Ebrington is a must see venue in the City.

A 29-acre site which lies at the heart of Northern Ireland’s second largest city and faces into its stunning riverside waterfront. Few cities have an opportunity to create a new place to work, live, play, visit and invest right within its city core. Ebrington, just like Titanic Quarter in Belfast, is poised to play its part in driving a new era of economic and social development for the city, its people and those who will choose to call it home. The ongoing regeneration of Ebrington supports business, leisure, tourism and residential development opportunities on its site which has already seen significant regeneration and redevelopment.

Derry-Londonderry is the second largest city in Northern Ireland and the fourth largest city on the island of Ireland.  It is the “capital of the North West” and straddles a key position as the principal city on the border into the Republic of Ireland. The city has an urban population of more than 100,000 and a wider cross-border City Region of over 350,000.   The city has a remarkable and rich history, culture and heritage packaged within stunning landscape and natural assets, including the best fishing rivers in Europe.

A UK top ten entrepreneurial city with the campus at Magee (part of Ulster University) with a new medical school and international college which will attract and retain even more students and academic talent. More recently it has been undergoing a social, economic, and environmental transformation which is evident right across the city from the stunning architectural Peace Bridge to the lasting cultural impact of the UK City of Culture 2013 programme.

There is tangible confidence and a new clear vision for Derry-Londonderry with true partnership taking place across public, private and third sectors to drive and realise the collective vision and ambition for the city.

WHY DERRY-LONDONDERRY AND WHY NOW?

Most importantly, the city is a youthful one with 34% of the population under the age of 25 making it one of the most youthful cities in the UK and
Europe. This aspect of the city’s population is significant – well educated and entrepreneurial – and when combined with the joined-up partnership
currently in place, it is the driving force behind the city’s future through investment, regeneration, innovation and research, entrepreneurship, and
sustainability.  Derry – Londonderry is a highly cultural, entrepreneurial city ready to soar to new levels. The regeneration at Ebrington plays a key role in unlocking 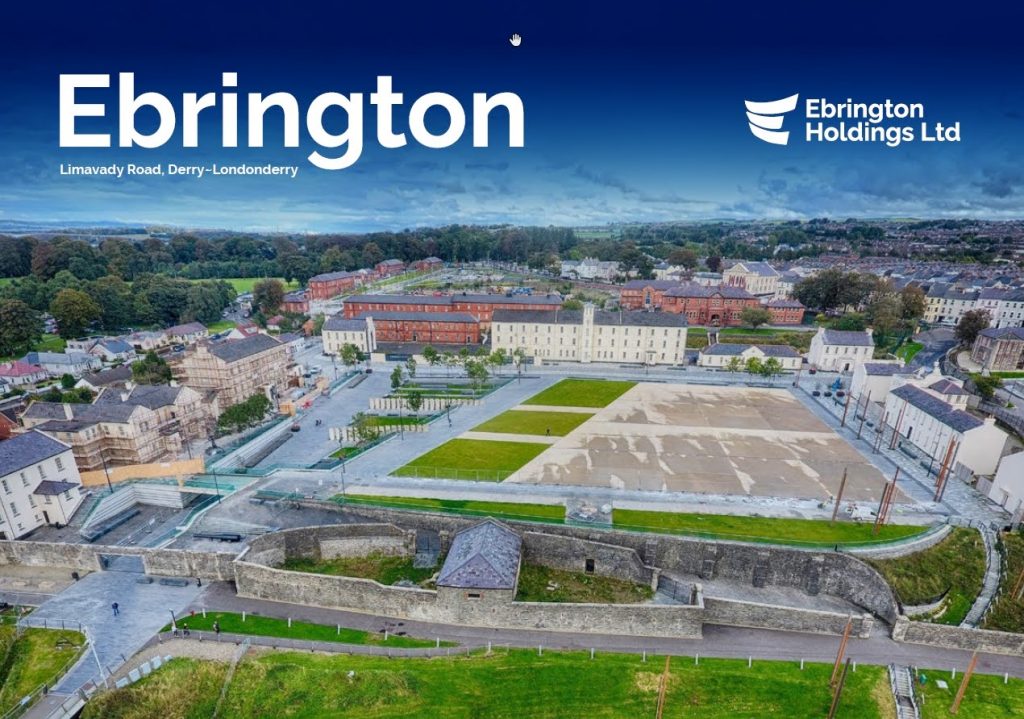